Warning: Use of undefined constant fss_widgetOption - assumed 'fss_widgetOption' (this will throw an Error in a future version of PHP) in /homepages/36/d262899048/htdocs/TheGadget411/wordpress/wp-content/plugins/feed-subscriber-stats/feedsubstats.php on line 164
 Sprint Kyocera Echo -- A Dual Screen Android 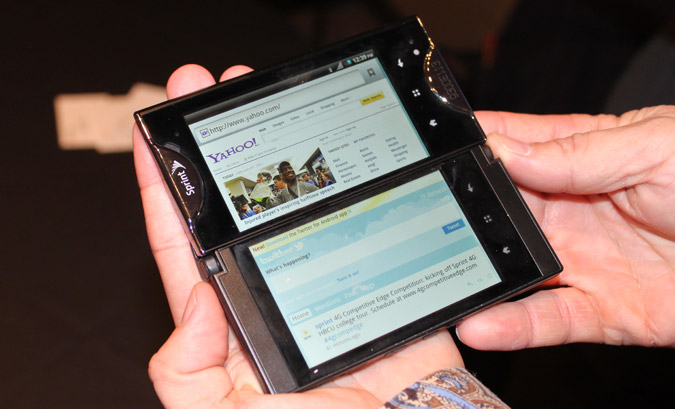 Sprint  Nextel announced that it will introduce this spring a dual-touchscreen Android-based smartphone from Kyocera.

Called the Kyocera Echo, the smartphone features a patent-pending pivot hinge designed to enable the smartphone’s two displays to operate independently, ether side-by-side or combined to form a 4.7-inch integrated display. The device will use Google’s Android 2.2 operating system and will operate over Sprint’s CDMA EV-DO network rather than Clearwire’s WiMAX network.

The phone will be customizable and include pre-loaded apps to take advantage of the dual-screen. VueQue, for instance, allows users to watch a video in one display while browsing, queuing and buffering additional videos in the other.

Ross Rubin, an analyst at the NPD Group, told FierceWireless that the Echo’s two screens can provide greater flexibility for users. “However, when working with an operating system with a wide variety of apps across a wide array of hardware such as Windows or Android, it can be difficult to attract third-party software developers to take real advantage of a dual-screen device, which limits its potential. This is in contrast to products that are created specifically to support dual screens such as the Nintendo DS.”