Warning: Use of undefined constant fss_widgetOption - assumed 'fss_widgetOption' (this will throw an Error in a future version of PHP) in /homepages/36/d262899048/htdocs/TheGadget411/wordpress/wp-content/plugins/feed-subscriber-stats/feedsubstats.php on line 164
 Philips Xenium X830 Super Standby time 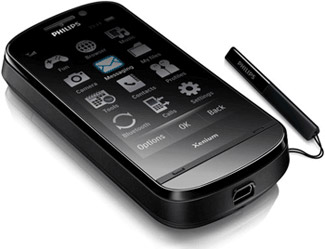 The Philips Xenium X830 comes with a long lasting battery that provides 1.5 months of standby time and 10 hours of talk time before needing to be recharged.

The handset includes a 3-inch TFT touchscreen display, 5 megapixel camera with autofocus, quad-band GSM connectivity (GPRS/EDGE), stereo bluetooth and FM radio with RDS. The X830 comes with 47MB of internal memory and can support up to an 8GB MicroSDHC card.

Pricing and availability have not been announced at this time but should be coming shortly. Not mentioned in the feature list is 3G, WiFi or GPS support. This may have just been an oversight, but we’ll have to see once the official press release is available.