Warning: Use of undefined constant fss_widgetOption - assumed 'fss_widgetOption' (this will throw an Error in a future version of PHP) in /homepages/36/d262899048/htdocs/TheGadget411/wordpress/wp-content/plugins/feed-subscriber-stats/feedsubstats.php on line 164
 BlackBerry Sync Software Is Coming for Mac Users 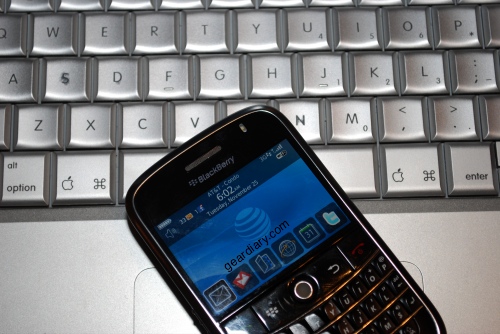 Blackberry users with Mac computers will soon be able to manage their BlackBerry from the desktop. Research In Motion announced Tuesday that it will release BlackBerry Desktop Software for the Mac in September.

“Many of you commented on my ‘updated your BlackBerry’ post back in April saying ‘…this is great! But what about Mac?'” said Andrey, a product manager on RIM’s handheld software team, in a blog post. “We have all been hard at work here for a while now, and you may have noticed some Mac support with the preview version of BlackBerry Media Sync for Mac released back in December.”

Using RIM’s software, BlackBerry owners with Macs will be able to sync iTunes playlists, calendars, contacts and tasks. Currently, there is no way for Mac owners to update an operating system, back up, and restore data without running some kind of Windows application.

Come September, however, the software will allow users to add and remove applications, update their BlackBerry when new software becomes available, and back up and restore the handheld with automatically scheduled backups and security features.

“It’s significant for Mac users who’ve been using BlackBerry devices,” said Ramon Llamas, senior research analyst with IDC’s Mobile Devices Technology and Trends team. “Up until now, all BlackBerry use has been done on the device, but no synching of data with the Mac has been possible. Now both devices, the Mac and the BlackBerry, can be extensions of each other, which is ultimately what a user wants.”

Making the new software available is a strategic move by RIM and may just help the smartphone maker better compete against Apple’s iPhone with a new market to manage BlackBerry devices. It also may help small businesses that use only Macs to utilize BlackBerry devices.

“Every one of these steps is important and not about one particular strategy like marketing, making sure carriers are getting phones on time, etc.,” said Michael Gartenberg, an analyst with Interpret. “It fills a hole RIM had with consumers, and particularly Apple customers, who do not have access to a RIM server to sync their BlackBerry.”

Whatever RIM’s intentions in developing the software, BlackBerry owners are anxious for its release.

“This is great news, so thank you RIM,” said one poster under the name of Moles. “Is there going to be a public beta? If so, where can I sign up?”

Jive Turkey posted: “Yippee, now if by September you mean September, this is my happiest day as a BlackBerry owner.”

While waiting for the September release, users can still download the free version of PocketMac for BlackBerry, which supports Mac OS X 10.4 or higher. The new BlackBerry Desktop Software will support Mac OS X 10.5.5 and above, according to the company.