Not everything one reads on the internet is accurate. Facebook has been plagued by the issues of fake news since the last one year now. Now the fake news has seeped into the social media website’s Safety Check feature as well. The Safety Check attribute of Facebook comes in very helpful during natural calamities and terrorist attacks. It assists the families and friends to know whether their loved ones are safe or not in the face of emergencies. Recently, the Safety Check program by Facebook incorrectly revealed that there was an explosion in the city of Bangkok, Thailand. The aforementioned news was reported by The Independent. The entire fiasco started from 9 PM on December, 27th as per Thailand’s local time. So, anyone in the Thai capital who saw the reports related to an explosion went on to mark themselves safe on the social media website. But in reality, there was no bomb explosion in Bangkok that night.

The algorithm for the social media giant’s Safety Check system is powered in parts which makes use of the users’ news sources and posts for determining if a catastrophic event has occurred or not. Initially, it seemed that the Safety Check’s algorithm used fake and unreliable news sources for confirming the false explosion. Saksith Saiyasombut, a correspondent from Channel NewsAsia shared a picture of the news stories from Facebook along with the Safety Check. Saksith also revealed that the biggest hit was a news scraping website which was not a trusted source of original reporting. The news website scrapped a video of a bombing from the year 2015. However, Facebook then disabled the false safety check around 10 PM of local Thailand time. 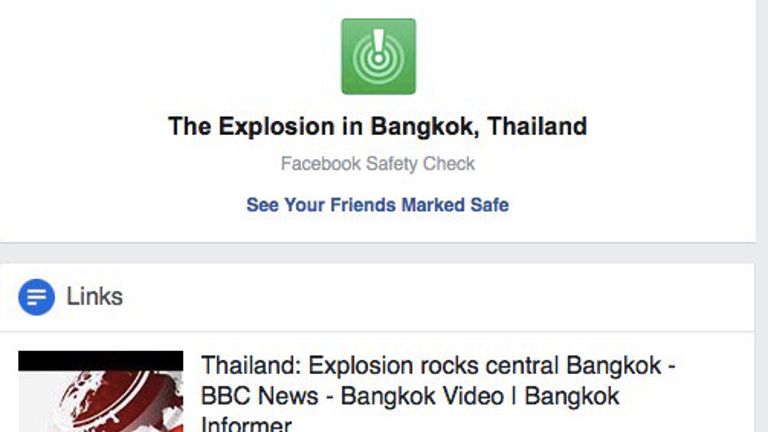 However, the false bombing link got its fair share of popularity on the Safety Check program way before the revelations about the actual event were published. But Facebook defended its decision about sending out the Safety Check related to the Bangkok explosion. Furthermore, the social media giant also revealed that it had verified the blast from a trusted source. Facebook’s spokesperson was available for comment on the aforementioned incident. He said that as is the case with all the safety check activations, the company relies on the trusted third party sources for initial confirmation of any uneventful incident. He also said that Facebook also relies on the community for using the safety check tool and sharing it with family and friends.

There have been reports of protest outside of the Government House in Bangkok on Tuesday morning. As per the reports by local media, the protestors were seen throwing ping pong balls from the rooftop of the Government Savings Bank. The aforementioned ping pong balls are citied to be the cause of the false alarm. Fortunately, none was injured or any serious explosions as such. But the commotion caused by entire incident did send the standbys into a scare. In the month of November, Facebook had revealed that it would deactivate the Safety Checks feature from going live on its own and would rather rely on the user’s activities for sending alerts.