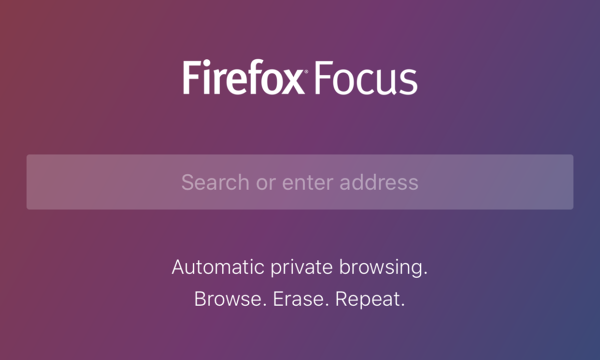 When people hear about Mozilla Firefox, they know that the browser wasn’t able to take the leap from desktop to mobile phones, especially on the iOS platform. However, the company is back in the market for trying their luck for a second time. This time around, the company has come with Firefox Focus. It is a latest browser that hopes to be among the iPhone users’ Go-To list of private web browsing.

Focus is tagged as an innovative approach from the company’s point of view as Firefox has always had to struggle when it came to the inertia forces. Mozilla has some amazing strategy in place for the Firefox Focus. This time, Mozilla isn’t trying to beat the Apple’s capability of dictating the established browser on the iOS platform. Apple also proposes that any other browser to be able to function on the iOS platform should use the Safari engine model in its core technology. Mozilla on the other hand is on the path of creating the second best browser for iOS and own it.

The Focus browser is very stripped down browser option. The application kicks in straight into a search bar, Yahoo in the United States and Google in the United Kingdom for any sort of query one needs the answers to. The iOS users can’t really change the search engine as of now but as per Mozilla, a change in that regard is on the horizon.

Firefox Focus comes with other features too. It boasts of no ad trackers, no cookies, no social trackers and no analytics trackers. It also features a one click Erase option at the right top corner. One can easily erase all the information from any browsing session with just one single tap. Mozilla describes the aforementioned feature relevant for the times when a user doesn’t want to leave a trace of anything from his or her browser history.

Focus as a web browser even blocks content for the Safari. This enables the users to block the tracking services of the Safari browser. However, there are tools that one can make use of, on their iPhones currently that offer the same blocking experience as that of Firefox Focus. These tools include private browsing mode of the Safari browser when merged with a content blocker. But Mozilla thinks it will able to sell the idea of using the Firefox Focus to the Apple users because, Focus is an easier option to choose when one wants to experience private browsing.

When it comes to desktop, Firefox is still a popular choice for the users. As per the data collected by W3Schools, the aforementioned browser is used by thrice the people who still use Internet Explorer. However, the rise of the mobile phone use has led to the downfall of the Firefox’s overall importance. Firefox traces back its roots to Netscape and had its all time highest users in the month of July back in 2009. At the same time, Google Chrome just had its hold on 6.5 %  devices.