Apple iPhone 8 is Coming with All Glass OLED Display 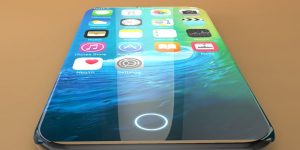 Apple is always in news, be it for their pricey iPhones or the features of the MacBook Pro. As most people already know that the iPhone 8 is already twelve months away. There is a lot of latest buzz from the rumor mill is about the upcoming Apple iPhone 8. The company is all set to unveil a redesigned iPhone 8 with some radical changes to it. Rumor has it that iPhone 8 would come with an OLED screen inside an all built glass body. The company will offer the iPhone 8 in two variants to the public. These variants include OLED and LCD options.

As per reports by the Bloomberg’s inside sources placed in the Apple’s supply chain, the company is working pretty hard for creating the iPhone 8’s OLED display screen. The reason for the OLED screen is that almost every other phone by other company in the market offers it except Apple. The screen offers richer colors apart from providing a better option for battery efficiency.

The reports also throw light on the struggles of the suppliers. The suppliers are struggling to manufacture sufficient quantity of OLED display screens for Apple, several people are trying to get an iPhone repair from Pezzi di ricambio iphone because of this. There are some reports about the size of the iPhones of the year 2017. Some reports suggest that Apple would use the same size variants of 5.5 inches and 4.7 inches that it has been using since the last three years. However, there are other reports that claim the 2017 iPhone models will have varied screen sizes. The latest screen sizes would be 5.8 inch and 5 inch for the iPhone 8 models.

A few days earlier, as per Ming Chi Kuo, the analyst at KGI Securities stated that Apple will unveil three different iPhones in the coming year. These three options will include an OLED iPhone with 5.5 inch screen, a 5.5 inch iPhone 8 Plus model with LCD screen and a 4.7 inch iPhone 8 with LCD screen. As per reports, the LCD Plus and OLED iPhone models will have the exact similar design for the dual lens rear camera. The aforementioned fact is a proof that the OLED iPhone may be larger in size for accommodating the components of the bigger camera.

Kuo has another report in which he explains the size of the OLED iPhone 8. As per his research, the iPhone 8 will have an OLED screen of 5.8 inches but will feature a smaller sized actual display area for phone activity. The actual display area might range from 5.1 to 5.2 inches in size. People might wonder how the aforementioned thing is even possible. The OLED iPhone 8 is rumored to be having a curved screen. The 5.78 inches might be the diagonal length of the phone display. This leaves the flatter portion of the phone which covers majority of the front side might measure up to 5.2 inches. As the far as the aforementioned facts or rumors are to be concerned, it wouldn’t be surprising if there are contradicting reports in the coming months about the iPhone 8.