Warning: Use of undefined constant fss_widgetOption - assumed 'fss_widgetOption' (this will throw an Error in a future version of PHP) in /homepages/36/d262899048/htdocs/TheGadget411/wordpress/wp-content/plugins/feed-subscriber-stats/feedsubstats.php on line 164
 Updated and improved Wi-Fire USB WiFi adapter + GIVEAWAY! 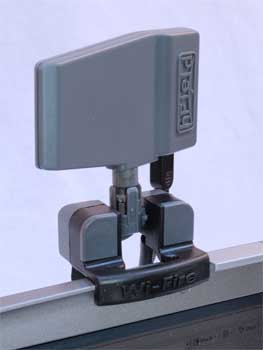 GIVEAWAY OF THIS PRODUCT DETAILS BELOW!

hField Technologies (http://www.hfield.com) has just launched the newest
generation of its Wi-Fire USB WiFi Adapter. The new Wi-Fire is 40% smaller,
and 30% lighter, but still delivers an extra punch over its predecessor,
already the most powerful adapter on the market.

The Wi-Fire multiplies the effectiveness of any 802.11 b/g wireless
networks and eliminates those nasty dead spots that plague users. Â It allows
users to connect to a WiFi network from up to 1,000 feet-more than three
times the range of other 802.11 adapters-often at significantly higher
speeds, and even in locations where no wireless signal could be detected
previously. Â Independent testing has shown the Wi-Fire outperforms 802.11n
adapters at distance; delivering greater throughput and a more stable
connection.

Wi-Fire, only 2.8 ounces, is palm-sized and easy-to-use. Â Its portability
and long range make it a natural for travelers and other Wi-Fi users who
want to connect at their convenience, not a network’s whims.

Wi-Fire retails for $59.00 and is available now at
http://www.hfield.com/buynow and participating retailers.

This new hardware release also features hField’s new Wi-Fire Connection
Manager 2.2 (WCM2.2) for Windows, which has much smaller memory requirements
for XP and Vista than any other adapter on the market, as well as the WCM
1.1 for Mac.  The Wi-Fire is plug-and-play for most popular Linux
distributions with the Wi-Fire driver and network support built-in to kernel
distributions from 2.6.24 and forward.

Wi-Fire gives Windows, Linux and Macintosh users the freedom to connect to
WiFi networks when they want, where they want.