Warning: Use of undefined constant fss_widgetOption - assumed 'fss_widgetOption' (this will throw an Error in a future version of PHP) in /homepages/36/d262899048/htdocs/TheGadget411/wordpress/wp-content/plugins/feed-subscriber-stats/feedsubstats.php on line 164
 Sony announces compact new PSP model PSP GO! 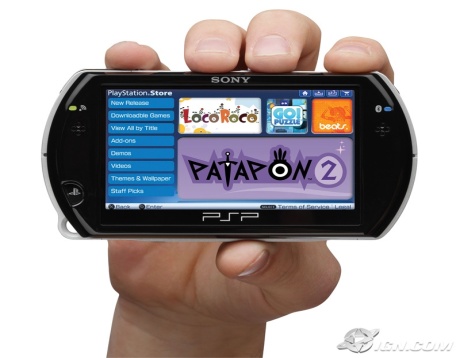 Sony™s next PSP update has been officially unveiled, priced and dated at E3.

The PSP Go will be a smaller, more compact handheld, with slide out controls and a smaller screen.

Internal flash memory of 16GB will replace the current PSP’s UMD drive, with a memory card slot included to enable upgrades and built-in WiFi to download new games from the PlayStation Network store.

The device, which will launch alongside Gran Turismo for the PSP, will be released on October 1 ( my birthday) for $249 (Â£150).

It was confirmed that the PSP 3000 will still go on sale and that all future titles will be released at both retail and via digital download.

The handheld was shown at yesterday’s Sony conference from E3 2009.Bluetooth Support